It’s Only a Headline

IT’S ONLY A HEADLINE

“It is awfully easy to be hard boiled about everything in the daytime. But at night it’s another thing.”

(Chicago)—It was shaping up to be a perfect Saturday night. A romantic one, I hoped.

My apartment offered the perfect view: a full moon slicing the wide, black lake with silver; a gentle snowfall. And I had done my due diligence: phonograph readied; pitcher of martinis chilling; fresh flowers on the dining room table, next to linen napkins; rack of lamb –French cut– warming in the oven. (Courtesy of Fritzel’s.)

Tina’s smile was especially soft when she arrived shortly after eight.

Moments later, as I filled the martini glasses in the kitchen, it started. 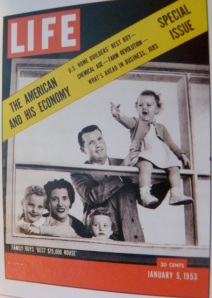 “What the hell is this?” I heard Tina yell from the living room. “The American and His Economy. What a bunch of nonsense. His economy.”

“What are you talking about?” I said, placing the two straight-up Beefeaters on the coffee table.

Tina held up a recent LIFE magazine for me to see and then slammed it on the couch.

“Get a load of this cover. Since when does the American economy belong only to men? Look at this: Mom and the girls are looking through the lower window while Dad is high above his entire family –supporting his little princess. So the message here is what, Mom is relegated to the role of a child while Dad has a loftier position as breadwinner? The American and His Economy.”

“It’s more than a headline. What about this photo? It’s wrong. Women play just as much a role as men do. In everything.”

“There’s no hidden message here. No secret behind the photo. It’s just a photo that’s all.”

I took a stiff drink. I knew what was coming but thought about the lamb.

“Women don’t work as much as men because they’re discriminated against. Oh, sure women were good enough during the war to fill in for the men. Women worked everywhere, in munitions factories, shoe stores, banks –all over the place. And for a lot less that the men got doing the same jobs. And what about Women Air Force Service Pilots? The war’s been over for seven years, the economy is strong, and that’s only because of the men, right? Rosie the Riveter is long forgotten, I guess. The economy is a male thing —LIFE magazine– his economy. Who writes this trash, Sam?”

“It’s only a headline, I tell you. Did you read the story inside?”

“Don’t have to. I know what it’s gonna say: ‘Just like the First Lady says, women’s lives revolve around their men’…or…‘A wife is the best career a woman can have.’ A bunch of nonsense. And it won’t get better. Especially for those girls on the LIFE cover.”

I looked out the window. Frost covered much of the view. The lake had lost its glow.

Copyright © 2011. John Theodore — All Rights Reserved. Text may not be reproduced without permission.