At first glance, coming right at you, its face comes to life, the way a familiar comic strip character jumps off the page: Its sweeping, cream-colored roof forming a widow’s peak above a set of divided, recessed windshields; below, wings of silver embrace its centered headlamp; a ribbon of orange wraps around its muscular, green body, a body that glides effortlessly, seemingly on air, inches off the pavement; its long trolley pole sliding along a 600-volt wire high above the street, catching magic. Chicago’s Green Hornet, riding on bands of steel that crisscross the entire city, clangs its bell and coasts to a stop. 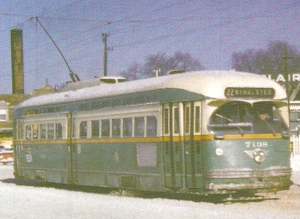 (22 Clark-Wentworth Route) –We lost an old friend this month. We’ll have to get around without her now.

Sure, at times she annoyed us, showing up late while we waited for her out in the cold. But we grew up with her; she was always there, and to be honest, we often took her for granted. It’s only been a week but I miss her already. I still expect to see her coming around the corner, dressed in cream and green, hugging the pavement, cutting through the snowflakes, accommodating us all.

On June 21, while most of us were starting another Saturday morning, Green Hornet 7213 completed her final run on the 22 Clark-Wentworth route. She clanged her bell twice and rolled quietly into the CTA barn at Seventy-Seventh-and-Vincennes, never to be seen again.

For ninety-nine years, streetcars had carried Chicagoans across our city. And like any good friend, we gave them nicknames. The noisy, wooden cars of the “Red Rocket” rattled through the Loop in the Roaring Twenties. Chicago boasted the largest trolley system in the world; more miles of track and more routes than any other city. In 1929, 3,700 streetcars carried 900,000,000 passengers –for seven-cents a ride. Midway through the Depression, we rode the “Blue Goose” on the North Side, while Southsiders took the “Blue Devil.” And after the War, the quiet, sophisticated “Green Hornet,” the grandame of streetcars, took us where we needed to go.

But in recent years we could see her slipping. She had difficulty in the busy streets; getting through traffic was a chore for her. Because of her one-track mind, if you will, she had a hard time avoiding trouble. We lost our patience. The electricity was gone. The bus, a faster, more nimble way to get around, captured our attention.

“It’s a real shame we’re losing the streetcar after all this time.” Neil Gleason, a large Irishman with a red nose and quick smile, was making one of his final runs at the front end of a Green Hornet, on the 22 Clark-Wentworth route. Gleason, who had continued the legacy of Irish motormen for more than two decades, was part of a group of streetcar men that once numbered 12,000. “Traffic these days moves too fast for streetcars. People are always in a hurry; it’s not healthy, if you ask me.”

I took my final ride on Gleason’s Green Hornet a few weeks ago, standing up front as the streetcar headed downtown from the South Side.

“You know, a spot on the cars was considered a top notch job in the city,” Gleason said as his Green Hornet turned down Clark Street. “But you had to be a real man to handle the cars, especially years ago in the winter when the streetcars were always freezing. The windshields covered quickly with ice and frost, and the motorman had to light a match to defrost a small peephole so he could get a clean view. And it was really tricky trying to stop on a slippery track, especially when the car was jam-packed with people.

“But you know, it was a good job. Back in the Depression years, when I first got on the cars, other city workers, like policemen and firemen and teachers, weren’t getting paid, but the streetcar men always got their money. Even today, with the recession and all the layoffs all over the country, the CTA is still hiring and paying $2.39 an hour to start. It’s still the best job in the city.”

As we rode along Dearborn, Gleason, a Bridgeport native who said he’s got a job waiting for him at the Sanitary District, became philosophical: “Change is inevitable. You can’t persuade me that busses are better than streetcars, but who really knows. Only time will tell. Sure, they stink and waste gasoline, but they really are easier to get through traffic, and they’re faster. And people like that. Things change, you know, and it’s up to us to keep pace. It’s a shame, though.”

Forty-two Green Hornets survive, awaiting their fate at CTA barns. The CTA will try to sell them to cities like Boston, San Francisco, Philadelphia, where streetcar lines still thrive. But if they are not sold, they’ll be stripped down, and their parts –seats, motors, windows– reused for our new rapid transit railway.

As fate would have it, on the same day Green Hornet 7213 completed its final run, 20,000 Chicagoans rode for free on the CTA’s inaugural line along the Congress expressway, America’s first combination rapid transit railway and automobile super-highway. You see, it’s all about speed now, not the journey.

Give me some time to remember a good friend before I take such a ride. As Neil Gleason says, “Change is inevitable…but it’s a shame.”

Copyright © 2011. John Theodore — All Rights Reserved. Text may not be reproduced without permission.